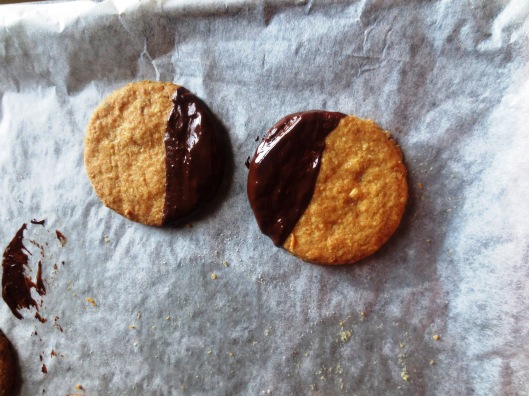 I can’t get excited about root vegetables. This is probably a crime of sorts. The socky, damp nature of pressure-cooked parsnips and celeriac and the flaccid broths I am now closely acquainted with have started to distance me from their virtues. Yes, warm, inviting, steamy, filling, healthy, earthy, beefy and sustaining etc. Worthy.

If I want something wet and warm it is to be tea; strong, lactic and the colour of a cheap suntan. The cup is important: wide, thin-lipped and bone china, something that warms the hands through. And then there is the all important dunking element: the biscuit. Not cookies, which are too soft and yielding and will flop into the tea and turn it to mush. It must be a digestive. Sandy, burnished brown, the texture of rubble. A slight saltiness. Plain as plain can be. My childhood friend, Tuppy, would layer her digestives with butter and salt, an act I found impressive – she was the first as a child to make the connection between sweet biscuit and cool salt dairy. Digestives and cheddar are also a winner. 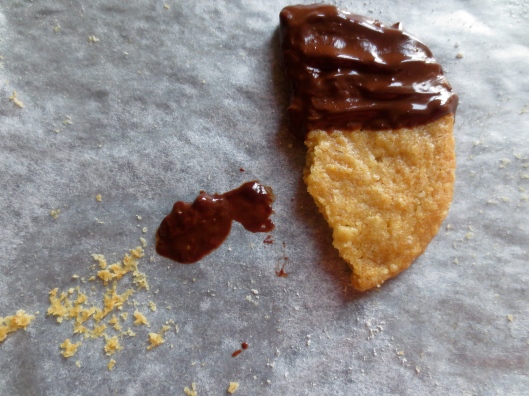 Digestives are also the fulcrum of the NHS – after a short stay you will be offered a dainty red packet of two and a cup of tea. It gets your blood sugar up, gives you something to gnaw on, brings you back to life. Sitting the other day with the curtain round me in a hospital ward, after a routine though still rather rugged procedure, I ripped open the red wrapper; the two fitted into my palm like medals. I made them last as long as I could.

“Are you alright in there?” the nurse asked, suspicious at my lingering as if I’d set up house in the corner of her ward. My answer was muffled with starch and sugar. I couldn’t just have one. “Fine!” I called out. She whipped the curtain back, but I’d already eaten most of the evidence. 24 hours of not eating and nothing can prepare you for the high. Digestives are genius. And she gave me another packet to go home with. She balanced them on a tray and walked beside me like a butler.

It was quite an entrance into the ‘lounge’. My cousin was waiting for me looking normal and smiling with the colour of a windswept sea walk still on her cheeks. I showed her my little red packet and she was impressed. It reminded me in that moment to be grateful – to be there in the first place, the recipient of care and to be going home. With her, with digestives. 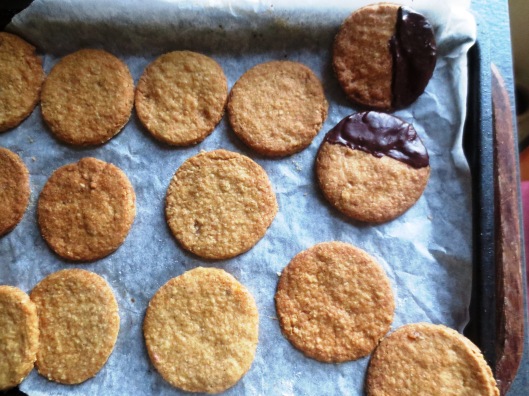 You can dip the digestives – once cooled –  in melted chocolate, and then leave them to harden on non-stick baking paper. Here I used dark chocolate but milk would also work. As you can see, they are not particularly pretty to look at, but very nice to eat, and will enrich your tea dunking activities. The unchocolated ones mimic shop-bought digestives in their sheer plainness. They are also nicely crisp and not overly sweet – you can serve them with cheese or pâté. They are very good eaten on the day but can be stored in an airtight container and enjoyed a few days later.

The term ‘digestive’ was reportedly derived from the belief that the biscuits had antacid properties due to the use of bicarbonate of soda. They were originally made with exclusively ‘brown meal’ – composed of fine bran and white flour. Because brown meal includes the germ, the flour was sweet, and perhaps because of this, digestives have also been called ‘sweetmeal’ biscuits.

No, he’s not paying me. I just happen to like his column. These are based on the classic River Cottage digestive, but made with the addition of ginger and dark chocolate. Both are optional, but if you do go down the ginger route, be generous with the little squares of stem ginger or the flavour and texture can get a bit lost. I used light muscovado here for the soft brown sugar. Makes 20-25.

Heat the oven to 180C/350F/gas mark 4 and line two baking trays with nonstick baking parchment. Put the flour, oatmeal, sugar, ginger, salt and baking powder in a food processor and pulse. Add the butter and pulse again until the mixture resembles fine breadcrumbs. (Alternatively, combine the dry ingredients in a bowl, then rub in the butter with your fingertips.)

Add the stem ginger and, with the processor running, trickle in just enough milk (about 30ml) to bring the mix together into clumps. I didn’t need to add any milk in my batch, my dough was already fairly sticky, but see how you go.

Lightly dust a work surface with flour, tip out the dough and knead gently into a ball. Press into a fat disc, wrap in clingfilm and chill for 30 minutes.

Cut the dough in half. Dust one half with flour and roll it out to 3-4mm thick, dusting regularly with flour to stop it sticking. The dough is slightly sticky and crumbly, so don’t worry if it breaks up a bit; just squash it back together and re-roll. Use a 7.5cm cutter, or a glass or cup, to stamp out biscuits, and transfer these to the baking sheets with a palette knife; re-roll the offcuts to make more. Repeat with the second piece of dough (or chill for use later), then bake for 10 – 12 minutes, until golden brown at the edges and lightly coloured on top.

Remove from the oven and leave the biscuits to cool and firm up on the baking sheets, then transfer them to an airtight container or eat them all.

If you want to: melt the chocolate in a basin over a pan of simmering water. Dip in one half of each biscuit, and leave to set on a silicone mat or a sheet of nonstick baking parchment, before serving. 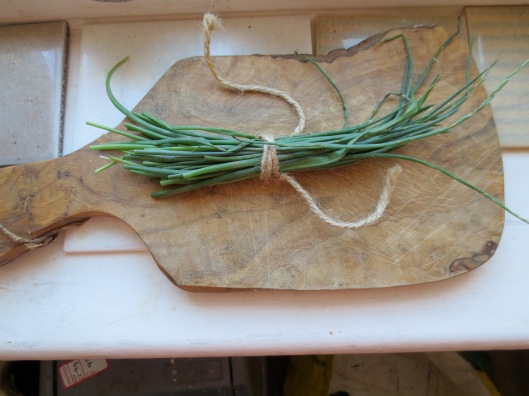 I can’t have any more trifle. Is it me or is everything around this time of year yellow and viscous? Cauliflower cheese, the aforementioned trifle with its layers of custard and cream and small pillows of sponge soaked in a harrowing and unnamed alcohol. Potatoes, parsnips, pavlova, wheels of varicosely veined cheese, the sweating clay mantle of marzipan draped over a now moribund Christmas cake (thank you, Alan Partridge, for reviving the word ‘moribund’).

I would kill for something green and empty of any tracklements or gravy. Something, as a young friend said recently, ‘farmier’. So it is in search of the farmy – still showing signs of its former life in a field, a bit on the grubby side – that I am featuring horseradish and chives, and beetroot with the tops still on. Admittedly, horseradish is on the spectrum of yellow, but far from viscous, it is cleansing, almost brutal in its sinus clearing properties.

This has been our first English Christmas for four years. I had forgotten what happens; we have had no one there at all, just echoing voices down the phone and talking heads via Skype, that instrument of torture, all smoke and mirrors. Then, all of a sudden, here we all are, sitting in the same overheated room for five and a half days eating individually wrapped chocolates housing an unfamiliar nut combination. Watching films incessantly, grazing like cattle, and forgetting, consciously, all the people who have nothing, and saying that next year we will volunteer for a homeless charity, to try to counteract the obscenity of all the waste. And then watching another film. 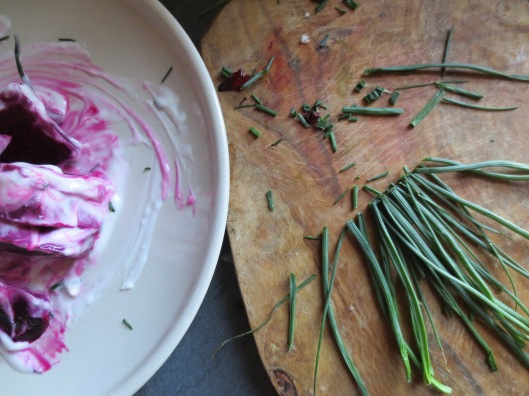 But these have been the highlights: travelling across the country afforded us sweeping views; rivers running red with iron in Somerset, an orange-bibbed pheasant launching itself into the air like a kite, faraway hills lush and dramatic with greenery and cold blue skies, and then the lashing rain that pitter-pattered on our skylight windows at night and came down in zig zags during the day. Frosty exteriors and meltingly warm central heating. Watching my dad play in his jazz band in a pub called The Valiant Soldier and meeting by chance a writer I’ve loved reading in The New Yorker, and admiring her shoes.

Dancing with mum in the kitchen, my uncle playing the ukulele. Pretending to be Pina Bausch. Sharing christmas cake recipes; to ice or not to ice? Feeling for the first time in a long time that I am a version of something familiar, not exotic or an anomaly. My accent no longer ‘adorable’. I am no longer adorable. It’s official. Something I am beginning to rather like.

Horseradish (below, mine) is a member of the crucifer family, along with radishes, turnips and mustard and looks like a rather disgusting parsnip. Unpeeled it smells of nothing, but once it is nude, it will make you weep copiously. Open a window. It is best treated in the same way that mustard is – it loves roast beef, glazed ham and sausages – really any fatty meats do well. Fatty, oily fish do too. In fact, I have had so many versions of this beetroot-horseradish-fatty fish-or-meat dish in recent months that I may well be verging on the unseasonal. 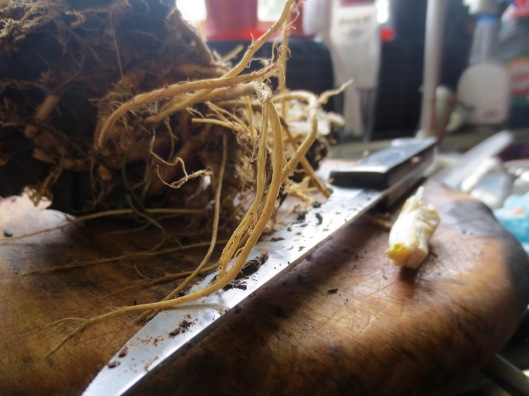 Grow your own horseradish with caution; it’s rampant and self-seeds and ‘wants to be’ highly invasive. If you find the root with the leaves still attached you can use them as a salad ingredient, or throw them into a saucepan with a glass of water and boil quickly, treating them as greens, though the leaves of my horseradish are always ravaged and ragged by the time the root is ready and go straight on the compost.

As for chives (Allium schoenoprasum), they add a lovely fresh, oniony grass-like taste – no surprise that they belong to the same family as the onion, leek, garlic and shallot. They have a natural affinity with anything creamy and/or with a nursery blandness such as eggs. Snip them with scissors rather than chop them with a knife. I see them growing ‘wild’ often though I suspect that it may just be a very vigorous, cultivated herb in someone’s abandoned hedge.

For the dressing
200ml thick yoghurt (Greek is good)
Large squeeze of lemon juice & one garlic clove peeled, bashed and chopped
3 heaped tbsp freshly grated horseradish (more if you’ve got a cold)
A small handful of finely chopped chives, plus more to finish

Heat the oven to 200C/390F/gas mark 6. Scrub the beets, but leave them whole, then place on a large piece of foil. Scatter with the garlic, thyme leaves, bay leaf and some salt and pepper, then dribble with oil. Scrunch up the foil to make a sealed parcel, place it on a baking tray and put in the oven. Roast until tender – about 45 minutes for small ones. The beetroots are cooked when a knife slips easily into the flesh. Leave to cool, then top and tail them, and remove the skin. Cut into wedges and place in a large bowl.

Whisk together all the dressing ingredients and season. Divide the beetroots between four plates and dollop the horseradish in the vicinity. Scatter on some more chives, season to taste and serve with lemon wedges and/or some scrambled eggs and/or mackerel fillets. 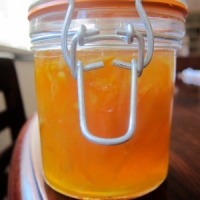