The cherimoya doesn’t so much have a skin as a hide. The green scales covering this frankly prehistoric-looking fruit conceal a milk-white, meltingly sweet interior. Though it’s part of the Annona family, to which the custard apple (Annona reticulata) also belongs, the first mouthful reminded me of drippingly ripe pear, with the scented cream of banana and the gentle acid of pineapple blooming moments later. The texture is both coldly crisp and rich.

As nature has given us a fool* in disguise, it would be crazy to tinker too much with it, I think. You can slice off the top and eat the contents with a spoon, which is fun, but the slippery – and large – black seeds take some navigating. You could pick them out and then eat the fruit out of hand, like I sometimes do with an avocado if I’ve forgotten cutlery.

Alternatively, the gentlest of interventions would be to tease out the seeds, give the fruit a squeeze of lime, add the zest, and then encourage the cherimoya’s sherbet-like qualities with a spoonful of creme fraiche. Any more doctoring and it would become sadly ordinary; no pies or tarts (or vicars) needed here. Another possibility is to cut it into chunks and add it to a fruit salad, but the challenge would be whether its subtlety and gentleness could hold up against other more dashing and showy specimens.

Though it can look quite menacing, it is actually rather a delicate, frail thing. The skin bruises and breaks easily, and, like a pear, the moment of perfection is fleeting, so always buy it firm to the touch and allow it to ripen out of direct sunlight over three to four days.

Custard apples and sour-sops (Annona muricata) – also in the same genus as the cherimoya – were brought to England by West Indians who had enjoyed them in the Caribbean, though the cherimoya tree itself originated in the uplands of Peru and Ecuador; the name is derived from the Inca language, Quechua, and translates as “cold seeds.” In Southern California, the trees have done well in the sub tropical and mild temperate climates of the region since 1871. Their season is short – March to May – and as they don’t travel well, you won’t find them in supermarkets, which makes them something of a curio; both a good and a bad thing. I’m not a fan of the exotic for its own sake, and much is made of its shape and strange armour. Ultimately, I think the cherimoya is a find because it carries within it a palimpsest of flavours and textures we’ve encountered elsewhere. My first mouthful made me think of ambrosial, just-setting custard, which then took me back to Ambrosia Devon Custard in a tin, which as a child – and you’ll have to trust me on this one – tasted amazing.

Traditionally a fool involves cooking the fruit and then either crushing or sieving it before adding whipped cream. If you’re a fan of texture, rather than uniform smoothness, as I am, then simply remove the (inedible) seeds and crush the fruit with a fork, which will start to turn to mush naturally anyway. It’s important to use fruit whose skin is soft to the touch, but not overly bruised or brown; the same principle as an avocado. Cooking here is unnecessary and will strip the cherimoya of its nutrients (it is exceptionally high in vitamin C) as well as the spellbinding freshness. I think lime juice accentuates the cleanness, but a squeeze of orange would work as well.

1 large heavy-sized cherimoya or 2 medium ones

Juice and zest of 1 small lime

Cut the cherimoya in half, and then scoop out the flesh, picking out the seeds as you go. Discard the seeds along with the skin. Crush or roughly chop the fruit (you may not have to do either if you have an exceptionally ripe one). Add the lime juice and the zest, along with the creme fraiche, and make sure all the ingredients are evenly distributed throughout. Serve in small glasses or ramekins. Sprinkle with extra zest for prettiness.

* A fool is an old English dessert made of crushed fruit and cream. Gooseberry fool is the quintessential summer pudding and rhubarb fool is lovely in winter. Apparently wild apricot fool is the bees knees.

Where to get them in LA: Rancho Santa Cecilia (based in Carpinteria) sells them at the Hollywood farmer’s market on Saturdays and the ever-helpful Mud Creek Ranch (from Santa Paula) do too, as well as appearing at the Wednesday farmer’s market in Santa Monica.

2 thoughts on “A word about cherimoyas” 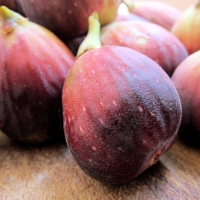 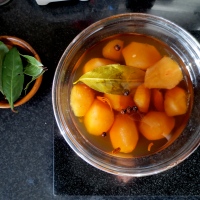 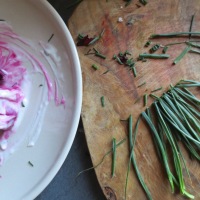