I know there are many cultures where you buy in dessert and LA is one of them. I wouldn’t gripe, but the bought stuff here is dazzling in its aesthetic perfection but tastes of nothing. And it’s incredibly sweet. So here’s what I’m thinking: I write a book (which will be read by about seven people, but to those people I say thank you) about what you can make or bring that is neither horrifically sweet nor terribly complicated. But it will taste good. And ‘afters’ need not be pudding or cake at all, but a rough cheek of apple and a chunk of crumbling Cheddar. Some toasted, spiced nuts. A bowl of sloping apricots with cardamom. Or a chocolate pot.

Cardamom was imported from its native India in the Middle Ages by Arabic traders to the Muslim Mediterranean (Turkey, Lebanon, Syria, Egypt for example), where it now belongs to the sphere of cooking known as the saffron-cinnamon link*. Beloved of Scandinavians too, it does well in sweet things (including sweet vegetables like carrots and parsnips). It is strong, searing almost – as if you have found yourself in a clearing after a recent bonfire involving eucalyptus: charcoal, menthol, ash, smoke and the shock of clean air combine, particularly if you whizz up the seeds in a blender and stick your head in. It belongs with almonds, pistachios, rose water, oranges and lemons. Good in bread and cake, bewitching in a poaching syrup for fruit. Chocolate it loves, including the white stuff where it cuts through the sweet gloop with masterful directness.

Oh yes, and Happy New Year! Due to technical ineptitude, I was unable to get my head round the so-called interactive report I posted at the beginning of January and those wishing to use it would have been blocked. I would like to say thank you to everyone who has read and enjoyed me, followed me and either commented publicly or privately and generally cheered me on. It is also very exciting to be featured on Freshly Pressed. It’s a solitary business, writing, so any encouragement is my meat and potatoes. 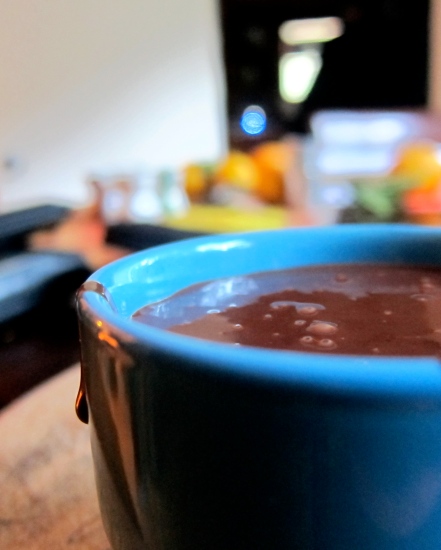 These chocolate pots have the minimum of sugar and no flour. There is cream though so forget it being good for you, except in the psychological, spiritual and sensual sense. As for chocolate, you can take the bitterness right to the edge, but try to keep it this side of fruity. I would stop at 70% cocoa solids myself. Though the recipe asks for an egg, I made it without and it was still lovely; a handy detail for the egg-intolerant.

This recipe comes from Lucas Hollweg’s so-much-more-than-just-good book Good Things To Eat. My take comes with a toasted almond or two, which gives the pudding a sort of carb-like purchase and is in keeping with its Moorish provenance. But go bare if you dare.

“Crush the cardamom pods in a pestle and mortar, or roughly chop, squashing the black seeds inside as you go. Put in a small saucepan with the milk and bring to a simmer, then turn off the heat, cover and leave to stand for 1 hour.

Put the chocolate in a mixing bowl. Add the cream and sugar to the milk and bring to a simmer. Turn off the heat and leave to stand for a minute, then strain through a sieve onto the chocolate. Allow everything to melt for a minute or two, then beat together until smooth and silky. Beat in the egg until everything is well combined.

Divide the mixture between 6 espresso-sized cups or small glasses and put in the fridge to set for a couple of hours. Add a splash of cream to the top of each one if you feel like it.”

*Read Sam and Sam Clark’s beautiful cookbook Moro for more on this.

Spread the nuts on a baking sheet and roast in a 300F (180C) oven for about 5 minutes to ‘tickle out’ their flavour. Try to avoid colouring them too much. Melt the butter in a pan over a medium heat and then add the warmed almonds. Sprinkle the brown sugar over them, and stir until the sugar has melted. Remove from the heat, then sprinkle with the salt and a fresh grind of pepper. Let cool to harden. Tap the almonds gently with a rolling pin to break them up or leave them whole.

26 thoughts on “Chocolate pots with cardamom”