This is tortilla, by which I mean Spanish omelette. Potatoes and onion sweated into a sticky mass and then flopped into beaten egg and then cooked at the lowest of heats until the top sort of coheres and then you flip it over and then it’s done. Better the next day. The recipe I use is by Delia. I somehow wish it wasn’t; someone less Spanish it would be hard to find. And yet it works.

We have been meaning to go on holiday. We were thinking of Mallorca, one of the Spanish Balearic islands. It’s apparently nothing like its previously sordid reputation and is actually really beautiful (and cheap if you use Norwegian Airlines and fly on a Saturday). But we didn’t go there. We flirted with Greece; Paxos, the place I visited when all I had was a few bin bags, a single bed sheet and £40. We didn’t go there in the end. Something about scrolling down a screen and picking a place at random was off-putting, as if all these places were somehow the same, Turkey, Toulouse, Lanzerote, Labia. I think by the end we didn’t know if they were countries or cities or what.

And it wouldn’t really have been a holiday, more a kind of fleeing. As if we were train robbers, when we were just waiting for our flat to become available, and needed somewhere to stay in the interim. But we became a bit heady at the idea of Europe because we haven’t had Europe for so many years; the idea of it, where you get on a plane that costs 10p and suddenly you are in Bosnia! Or you get on a train and you’re in Paris, city of dogs. A coach to World War 1! But I really missed going into a travel agent and being put into a trance. It’s not the same unless you’re frothing at the mouth and gently rocking while a lovely lady in a pink pelmet leafs through a catalogue and guides her gilded talon-shaped nails to some facts appertaining to you and your travel needs and then taps away at her keyboard for a while. The holiday always came to about £3,000 all in but it was like meditation. I always left with nothing but a few free magazines and a strange, limp smile on my face. 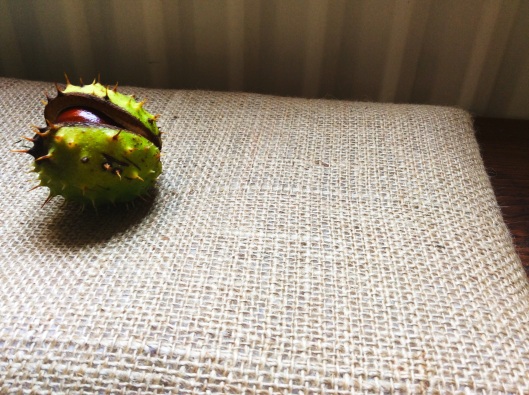 So we didn’t go away. Instead, I decided to photograph conkers against a hessian background and throw away my hideous shoes. I bought a new pair from Clarks shoe shop, which was also a hypnotic experience. In the end I had no idea what I was buying. They’re cream leather with green laces and they look like little crimped pies. “They certainly make a statement!” the assistant said, while I walked up and down. Anyway, I quite like them. And we have just left LA. Maybe we’re not ready for Europe yet. It is autumn here and everyone is going away. We’ve arrived and everyone is going. Mystified by the weather, everyone talks about it, and their colds, which are measly and mainly consist of sneezing. But there are extraordinary changes afoot here, and it’s exciting. There are storms and dangerous fissures in the chalk Downs, the sea is wild but still swimable. There’s a colony of rare kittiwakes nesting in the cliffs at Seaford. On the seafront, some kind Lithuanian fishermen handed us some mackerel, which were a startling, shiny blue with eyes like little buttons. I don’t actually know that they were Lithuanian, because I didn’t ask. It was decided that they were, through some weird process to do with their courtly manners.

I was described as ‘the lady in beige’ today. There I was draped over a plastic chair waiting to have ‘my bloods’ taken by the phlebotomist and it made me inwardly smile. And a kind chef from my favourite cafe Front Room in Seaford gave me my own ramekin of Spanish almonds to go with my egg and chips. His gesture and the plate of food reminded me of the tortilla – a warm feast of piquant, oniony yellows and browns – which feels right for autumn, for rugging up in various shades of beige, for staring out to sea, and for staying put.