That’s how I met her. Running from a broken down train and away from a car crash, in Newhaven of all places. The last time I made a friend this way was twenty years ago in a bakery in Venice, and my accent gave me away. It was heady, to think that’s how it can still be done, meeting in the street and suddenly you’re friends. I ran after her. I wasn’t chasing her or anything, but she just said quickly “follow me” and so I did. It was like being in Borgen.

Her stepfather was waiting for us in a car, and she had to explain quickly who I was and what was going on. I didn’t wait outside because of the freezing wind. I threw myself into the back like a labrador, and we were away. All round the houses, because of the crash. There weren’t even any buses, so if it hadn’t been for her I would have been walking along the English channel for two hours trying to avoid the dog turds. I still feel bad we completely ignored her stepfather. I slipped in a thanks everso much at the end. But it was too exciting, meeting like this. And having so much in common, we even knew people from way back. A cinematographer meeting an actress. Zero degrees of separation.

The last time it felt like no big deal. I met Charlotte in a bakery in Venice, and the next thing I know (and because of her) I’m sitting in Trieste having an interview for a place at Warwick University with the head of the Italian department and his daughter over a bowl of penne alla vodka. I remember the pinky-red sauce and the fumes of subtle alcohol, and the sheer exuberance of the conversation. Actually, he was a monologuer, one of those people who talks in order to stay alive. But in those days, it felt normal, this happenstance. Maybe all young people feel like that – somehow touched by a higher hand. I just wandered into things and it all came out alright. I wandered into success.

And wandered out again. Some things get better though; friendships grow more robust and less fickle. Charlotte soon disappeared in a blaze of vitriol and tirades. It was the age when you think you know it all and can’t bear to be told. And every conflict is a contest. She loved to tell me how rich she was, her parents had a huge pad, they earned ‘a shit load’. It was odd when I met them  – this quiet couple from Harrow, her mum a teacher of adult literacy, her dad a performer of silly walks along the Grand Canal.

But I have hope for this one. There’s no pressure for a start (we both say ‘no pressure’ a lot). No planning required (she lives round the corner in Seaford – a Seaford friend, finally). And it’s nice to know it’s coming up, this very-possible friend, amidst all the feverish wrapping, huddling, expectation and food. The somewhat enforced intimacy. I am looking forward. Which makes a change.

This is a bit of a cheat. But it gives everyone a breather from all the stolid mince pies and Christmas pudding, and the sheer load of food consumed on the day. It twinkles and it’s orange. And it’s a chance to show off your extravagance in buying in some marrons glacés (candied chestnuts) which are bloody expensive so just one each (and completely unphotographable, sorry, they look like bunions). I like to think it’s a nod in the direction of Italy and heat and sun. I have doffed my cap in the direction of the Venetian stalwart aranci caramellizzati, which began life at the Taverna Fenice. Happy Christmas.

Peel the oranges. Use a sharp knife for cutting citrus, if you want it to look pretty. Take a narrow slice off the stem and blossom ends. Cut down the sides of the orange from top to bottom, slicing away the skin and the white pith. Now cut into rounds and put into a bowl. Or, if you wish, serve each person individually.

Crumble the marrons glacés on top, then trickle the molten caramel sauce (by which I mean warm) over the cool fruit, where it will form nice ribbons. Squeeze the juice that has spilled all over the place over the top and it’s ready to go. Delicious with a glass of chilled champagne.

Salty caramel adapted from Nigella Lawson, How To Eat

Melt the sugar, butter and golden syrup in a thick-bottomed pan with the salt. When smooth and melted, let it bubble away, gently, for about 5 minutes. Then take off the heat and add the cream. Add more salt at this point if you like it lip-smacking. You can pour the sauce into a jug and serve hot, or do it in advance, refrigerate and reheat. It is truly stupendous.

16 thoughts on “In the street” 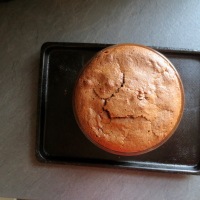 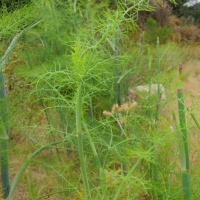 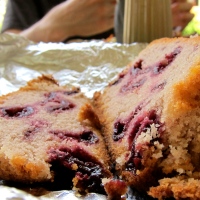