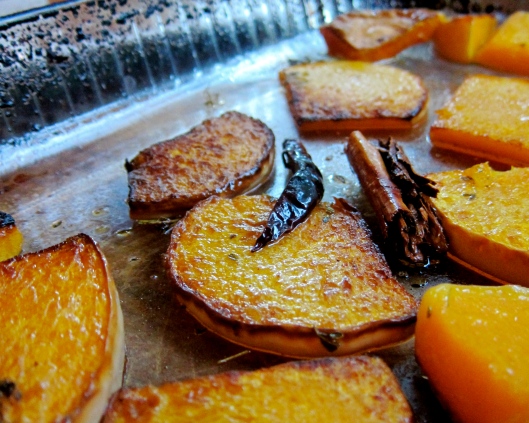 I could live on this. I’m already perilously close to overkill. I have it for breakfast with an omelette, on its own at lunch. It slumps in a devil-may-care way next to all sorts of meat and fish. It’s so over me. I’m praying it goes out of season soon, or suddenly becomes unavailable, so I can kick the habit. The fact that butternut squash is good for you is all the more confusing. Sweet, plump, comforting and the kind of neon orange I haven’t seen since my 1976 flares took my parents’ breath away, it heralds the start of the cooler months, climaxing on Thanksgiving in November.

I don’t think I was properly aware of squash before I came to America, in the sense of the entire ‘family’ of vegetables. In England, we have courgettes and marrows, and of course pumpkins. But here in California there is summer squash and winter squash, and so many sub-genres in between I could really do with a manual. In a nutshell, summer squash has a thinner skin, is tender and glossy (think courgettes) and winter squash, the butternut for example, is firm with a thick, tough rind.

The thing butternut squash most loves is ham. Boiled, then roasted, basted and then glazed with a treacly syrup. Both are sweet and soft, rich and caramelized, chunky and substantial. Interestingly, squash is not particularly starchy, so though it eats like a sweet potato, it has none of the fibrous load.

On our first Thanksgiving* as a couple in LA, three years ago, we had somehow missed all the invitations to join in with other families celebrating, and found ourselves a deux. We bought a ham from Trader Joe’s and some squash, and proceeded to have ourselves a party. Not having this tradition in England, it was hard to tap into the spirit. My only previous Thanksgiving reference had been the movie Planes, Trains and Automobiles, where Steve Martin’s character struggles to get home in time, with podgy irritant John Candy tagging along. My favourite line is when the two of them are sharing a bed, and Steve Martin says: “Those aren’t pillows”. It is a funny film, tinged with sadness, and I loved John Candy’s shower curtain ring salesman. I can never remember if they do make it back in time, but I was left with a memory of those awful, corporate hotel rooms, piles of snow, and men screaming in car parks.

That ham gave me terrible wind. Afterwards, we went for a walk in Runyon Canyon and watched people working out. There were families – shoals of them – walking off their feast, laughing and shouting to one another. We sat on a bench and looked out at the sea of buildings below and beyond, everything indistinguishable. I think we realized then that it was tantamount to missing Christmas. The timing was off, but the squash was good. I am still giving thanks for it.

A large handful of sage leaves

Preheat your oven to 180C/350F/Gas 4. Halve the butternut squash, remove and reserve the seeds, then cut the squash into slices or chunks with the skin left on. Using a pestle and mortar, or a metal bowl with a rolling-pin, bash up the dried red chilli with a good pinch of salt. Add the whole sage leaves, the cinnamon and enough olive oil to loosen the mixture, and rub the whole lot over the squash pieces, so they are well covered.

Place the squash in one layer (this is important) in a roasting tray and season lightly with salt and pepper. Sprinkle over the seeds, cover tightly with tin foil and bake for 30 minutes, or until the skin of the squash is soft, then remove the foil and cook for another 15 minutes until the squash is golden and crisp. Remove the cinnamon and tuck in.

*Thanksgiving takes place on the fourth Thursday of November in the US. You could say it’s the original harvest festival, started by the pilgrims and puritans emigrating from England in the early 17th century, and assisted by the Wampanoag Native Americans who provided seeds and fish.